More than 120 David Bowie fans packed in to the University’s Knights Park bar on Saturday 7 January for a gig performed by tribute band Thin White Duke.

Bowie, who had kept his cancer hidden from the public, succumbed to the disease a year ago on 10 January 2016. Following a sell-out gig in May – held exactly 44 years after he had performed as Ziggy Stardust at the University’s Penrhyn Road campus – Thin White Duke returned to commemorate Bowie a year after his untimely death on what would have been his 70th birthday weekend.

In response to enthusiastic feedback from fans who attended the event in May, Professor Will Brooker once again fronted the band for a selection of the numbers. After belting out Suffragette City, The Jean Genie and Rebel Rebel dressed in a replica of the famous orange Ziggy Stardust dungarees, he later sang ‘Let’s Dance’ attired in a new, yellow suit reminiscent of Bowie’s smart 1980’s look and joined Thin White Duke lead singer Scott Fuller to perform Heroes. 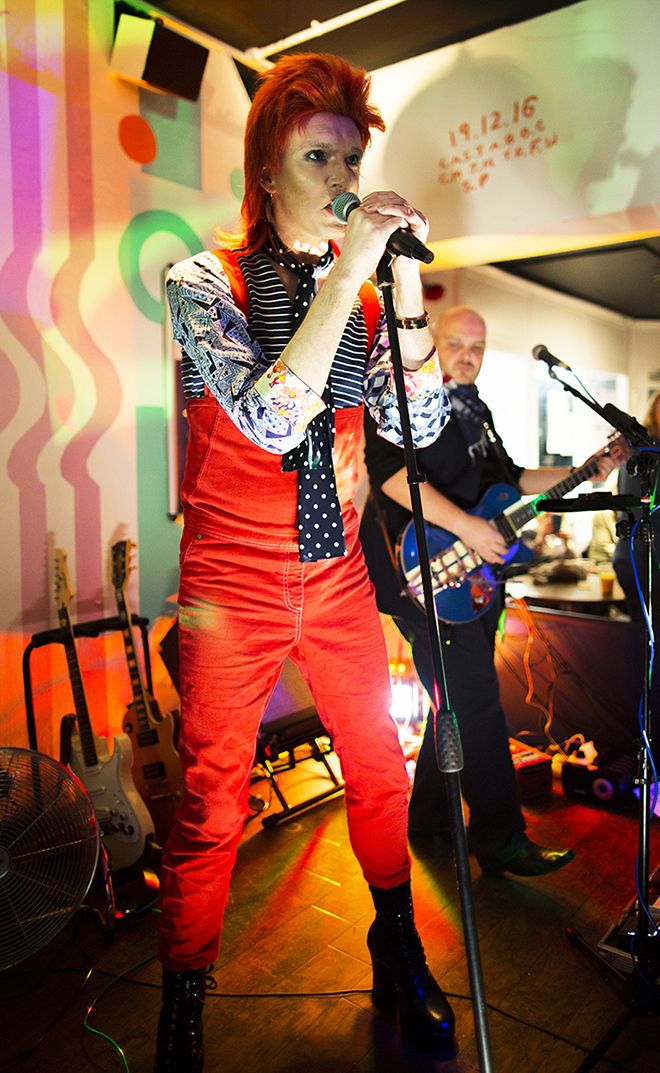 Professor Will Brooker, dressed as Ziggy Stardust, fronted the band for a selection of numbers at the tribute gig.Professor Brooker said that as well as celebrating the music legend’s work, the gig – held alongside the publication of his new academic book entitled Forever Stardust: David Bowie Across the Universe – also marked the end of his immersive Bowie research project.

Ahead of writing Forever Stardust, Professor Brooker spent a year attempting to acquire an original understanding of his hero’s creative thought processes by transforming himself into Bowie, spending a few months at a time experiencing specific periods in the star’s life. This research process was documented in an hour-long film, called ‘Being Bowie’ which will be screened at the University on Wednesday 25 January.

Professor Brooker said the gig had aroused complex feelings and he’d been apprehensive about a couple of tracks that he was singing for the first time in front of a large audience. “It was a real privilege to be asked to join the band again but the 1980s material was new for me,” he admitted. “It was good to be able to give the audience at least four different Bowies, though – I performed as Ziggy Stardust and as Bowie in his 1980s incarnation and Scott Fuller, the lead singer of Thin White Duke, appeared as Bowie from 1975 and the Reality Tour of 2003. Between us, we covered tracks spanning most of his career from 1969 to 2013.”

Kay Palmer, a Bowie fan who studied a humanities degree at Kingston University from 1980-1983, said the concert had given her a real sense of nostalgia. “I came with my husband Jeremy who also loved Bowie’s music and we both felt it was a great way to remember him, especially as this would otherwise have been a very sad time for Bowie fans,” she said. “I really enjoyed my time at Kingston and haven’t been back to the University for more than 35 years so it was also lovely to take a trip down memory lane.”

Thin White Duke drummer Steve Weaver, said the band was delighted to return to perform at the University.Drummer of Thin White Duke Steve Weaver said the band had been eager to return to the University and had enjoyed reuniting with Professor Brooker for the concert. “I think the atmosphere was even better than when we were here in May,” he said. “It was great to play with Will again too. He really looks the part, his singing skills have developed a lot during the past few months and I thought he gave it his all.”

Professor Brooker will be giving an inaugural lecture on Wednesday 18 January, entitled ‘The death and resurrection of David Bowie’ but said it would be a ‘walk in the park’ compared to performing live on stage. “Giving a lecture is my usual day job whereas trying to do justice to one of the greatest pop artists of all time is very nerve-wracking,” he explained.

He said he hoped the fans would feel it had been a fitting tribute. “We wanted to show our appreciation for Bowie’s incredible contribution to our culture,” he added.

James Giles is the Editor of the Kingston Enquirer, covering local news and events in Kingston, New Malden, Surbiton, Tolworth and Chessington. View all posts by James Giles